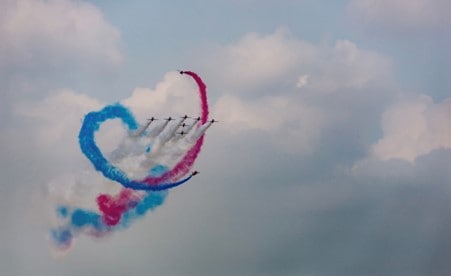 However, the very best viewing points can be found between Bournemouth & Boscombe piers, either at sea level or from a little higher up on a road called East Overcliff Drive.

As well as flying displays throughout the afternoon and evening there will be so much to keep you entertained this year, with a programme of events similar to that of the 2019 Bournemouth Air Show including a Royal Navy Dive Tank, unarmed combat displays, cooking demonstrations by navy chefs, the newly located RAF village and a traditional funfair.

Not to mention exclusive viewing points for Bournemouth Air Festival VIP ticket holders & around 1.5 miles of wonderful traders with food and drink to keep everyone well fed and entertained and night air music and entertainment and so much more.

The Red Arrows will be putting on a spectacular display above Bournemouth at the 2021 Air Show. The Royal Air Force Aerobatic Team, also known as the Red Arrows, is one of the world’s best aerobatic display teams. They represent the speed, agility and precision of the Royal Air Force, the team is the public face of the service.

See the Red Arrows this year at the Bournemouth Air Show 2021 and book your stay in Bournemouth with us at Crompton Serviced Accommodation!

We have a range of self catering houses in Bournemouth only 7 minutes from the Beach and walkable while close to all major transport hubs.